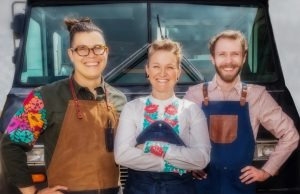 “CEF is an incredible resource for entrepreneurs starting out with little credit history or residency in the US but have big ideas. Its mission-based focus matched ours and helped us to achieve our dream.”
– Siena Trapp Bowie, Co-owner

Cacao beans (or cocoa beans) were discovered thousands of years ago in the Americas. They grow in pods on trees located near the equator. How a singular strain of cocoa bean made its way from the mountains of Mexico to the foothills of Boulder, Colorado, is the story of a globally-minded family seeking to craft a socially-conscious lifestyle with sustainable roots. Sienna Trapp Bowie, co-founder and owner of Fortuna Chocolate, and her brother, Spencer Bowie, each left Boulder to visit Europe, Asia and South America, where they were exposed to local foods and native cultures. “We knew we wanted to start a business in our hometown someday,” Sienna recalled, “supporting the organic food movement and mission-based products we enjoyed on our trips.”

A move to Mexico City set this plan in motion. There, Sienna met her husband, Aldo Ramirez Carrasco, and discovered the rich history of cacao. They went on to spend five years in Tokyo, Japan, where Spencer joined them for two years, to explore the aesthetics and flavors of some of the world’s finest flagship chocolatiers, followed by five weeks in Denmark where Sienna and Aldo worked on a family-run farm and brewery outside Copenhagen. The couple returned to Mexico to learn more about the local cacao industry and to seek out the very best producers. They moved back to Boulder and continued to experiment with fine cacao to make artisanal chocolate.

When Spencer returned to Boulder from Tokyo, the team was ready to launch the business but needed financing. “I researched online and found the SBA’s new LINC program,” said Sienna. “I entered our info and got a response from Colorado Enterprise Fund (CEF) about my start-up business plan.”

She applied and got a loan from CEF in 2015 which allowed her to upgrade a retired mobile library truck the team bought into a custom-designed manufacturing lab where Sienna, Aldo and Spencer produce premium chocolate for public and catered events, samplings and tastings, and local chefs.

Since opening Fortuna Chocolate, Sienna has grown her business from a sole proprietorship to an LLC. She has also collaborated on large projects with the Denver Botanic Gardens and local restaurants highlighting the origins and uses of cacao. The company sources its cacao beans directly from farmers at several organic single estates in three regions of Mexico. It also supports the Mazateca Women’s Embroidery Collective whose local women’s clothing designs Sienna hopes to sell in Boulder and Denver.

This year, Fortuna Chocolate celebrates its first anniversary which Sienna noted is a tribute to the power of believing in one’s vision despite bumps along the way. “CEF is an incredible resource for entrepreneurs starting out with little credit history or residency in the US but have big ideas,” Sienna remarked. “Its mission-based focus matched ours and helped us to achieve our dream.”